In this section, you will find words and phrases that will let you introduce yourself in Spanish and meet new people. You will learn to say your name and ask other people’s names. These are the most basic phrases that will help you start your first conversation in Spanish.

Topic summary in one video:

We have put together the most important words and phrases in one video to help you remember them as quickly as possible. Below the video you will find the list of all the new words and phrases with explanations.

Listen to the audio and read the explanations on how to use the words in day-to-day Spanish speech. 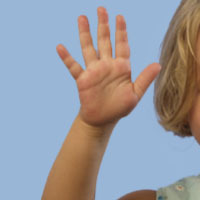 First of all, how to say “Hello”

In the “Greetings” section you will find many useful expressions to greet people in the morning, afternoon and evening. So now we’ll see only the most important and the easiest way to say “Hi” in Spanish:

Hola
Hi / Hello
“Hola” is a word that you can use both in formal and informal situations. It means that you can use it to say “hi” to your close friends as well as to people you don’t know. 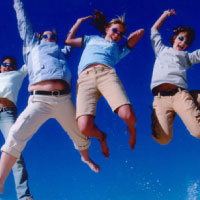 You’ll see that saying “My name is…” in Spanish can’t be any easier. Besides, you will also find two ways of asking people their name:

Me llamo…
My name is…
In Spanish, instead of saying “My name is Peter” we literally say “I call myself Peter”. The verb “llamo” means “I call” and the word “me” means “myself/me”.

¿Cómo se llama? (formal)
What is your name?
Remember that this phrase literally means “How do you call yourself?” This phrase is used in a formal situation when we have to treat people with great respect. You’ll find more information about the usage of formal and informal phrases a bit further.

¿Cómo te llamas? (informal)
What is your name?
This phrase is used in casual and informal situations.

When speaking about the usage of formal and informal expressions we have to take into account that every Spanish speaking country has its peculiarities. In Spain, for example, the usage of “tú” is prefered. They use “tú” with friends as well as with people they don’t know. In Mexico, however, things are a bit different. The informal “tú” is usually used among friends and young people, while “usted” is used to address strangers or elderly people. There are also Spanish speaking countries where instead of “tú” they use “vos” (Argentina, Paraguay, Guatemala etc.)

Mucho gusto
Nice to meet you
This phrase literally means “a lot of pleasure”: mucho = a lot, gusto = pleasure, liking.

Encantado
Pleased to meet you (masculine)
The word “encantado” literally means “pleased, happy”. This word is an adjective and in Spanish, it changes its ending depending on the gender of the person speaking. The ending “o” is masculine. So, a man says “Encantado”. Below you’ll find the feminine version.

Encantada
Pleased to meet you (feminine)
As you already know, the word “encantada” is an adjective and it’s feminine. Pay attention to the ending “a”. In Spanish, this ending is almost always feminine.

Spanish traditions
A kiss or a handshake?

In Spain, as well as in most countries of Latin America it is typical to greet each other with two kisses: a kiss on each cheek. However, people usually do it with friends and relatives. In formal situations (such as work meetings) a handshake is preferred. When greeting people with kisses remember that this act is utterly symbolic and the cheeks should merely touch each other. So don’t try to leave juicy kiss on a spaniard’s face, it’s not what it is about. 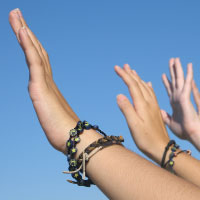 Starting a conversation in a foreign language is not easy, especially if you have just begun learning it. These phrases will always come in handy:

Bien, gracias. ¿Y tú?
Fine, thank you. And you? (informal “you”)
Grammatically, the word “bien” is an adverb. It doesn’t have any gender endings and doesn’t change depending on the gender of the person speaking. 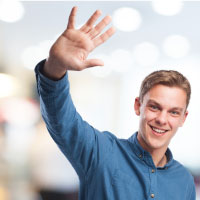 How to introduce another person

It’s time to introduce our friends. Here you will find several phrases that will help you introduce men and women in different situations (formal and informal):

Te presento a… (informal) / Le presento a… (formal)
Let me introduce you to…/ Meet…
The verb “presentar” means “to present, to introduce”. Pay attention to the words “te” and “le”. You might have guessed that these are the forms of the words “tú” and “usted”. The case is that when we say “I present to you” the form of the pronoun changes: tú –> te, usted –> le.

In English, the word “this” doesn’t have any gender and is used for both men and women. In Spanish, however, you should make a difference between “este” (masculine) and “esta” (feminine). Have a look at the following examples:

If you want to ask somebody’s name you can use the following useful phrases:

Él se llama…
His name is…

¿Quién es ella?
Who is she?

Ella se llama…
Her name is…

About modern Spanish
In Spanish, the pronoun is usually omitted

When we speak or write in Spanish, the pronouns (yo, tú, él, ella, nosotros,…) are usually omitted. For example, instead of saying “¿Quién es él? Él se llama Pedro” Spanish people usually say “¿Quién es? Se llama Pedro”. Although both versions are correct, the late one sounds better for a Spanish ear. 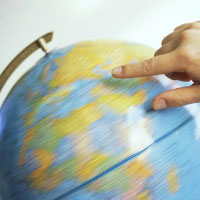 Where are you from?

It’s a very frequiently asked question. Perhaps, it’s not the most original way of starting a conversation but this phrase is easy to remember and good to have up your sleeve:

¿De dónde eres?
Where are you from? (informal)

About modern Spanish
More examples of phrases without pronouns

The expressions “¿De dónde eres?” and “¿De dónde eres tú?” mean the same and are both correct. Nevertheless, a native Spanish speaker would prefer the first option. This peculiarity of Spanish has to do with the fact that Spanish verbs (the verb “eres” in this case) allows us to understand who the doer of the action is without having to add any pronoun.

Let’s have a look at one more example: the phrases “Soy de…” and “Yo soy de…” (I’m from…) mean the same and are both correct. A native Spanish speaker would usually use “Soy de…”.

¿De dónde es usted?
Where are you from? (formal)